This year I’ve been spoiled.  We hardly had to deal with that weird inbetween season where there isn’t enough snow to ski but the roads are too bad to rollerski.  Although our loop in Canmore was little at first, the snow they made for us made the track high quality and we were able to jump onto race skis right away.

I’ve never even really ever had to experience “early season conditions”.  All through high school I was normally injured in some way or another to the point where I would spend most of november/early december on crutches.  Then I moved out to Bozeman where it we seemed to go easily from dry land to BAM midwinter conditions. Grethe also pushed our focus on the “dry land” season.  She made sure that we completed our dry land season even if we couldn’t rollerski any longer.  I remember during my freshman year we had gotten a foot of snow, we were all so excited, we were going skiing!  I showed up at the office and asked the ever hopeful question, “do we get to go skiing?”  She looked at me like I was crazy.  Of course we weren’t going skiing. …we were doing ski walking/bounding intervals at the “M”…even if it was through a foot of snow.  (the smart kids had gators…the smarter kids let the boys break trail)

After getting in some awesome on snow training the past couple of weeks to come back home to fairly typical, perhaps even better than average, snow conditions makes me feel a like I’ve been spoiled.  This morning I showed up to ski, on a crusty partially frozen slop with a dusting on top.  I was a trail snob for the first few minutes until I fell back in love with just how much I enjoy tromping around in the snow.  By the time I was done they had all the lit trails rolled for the high school team and had started to roll the birkie trail headed north from OO.  Intervals in the morning should be perfect! 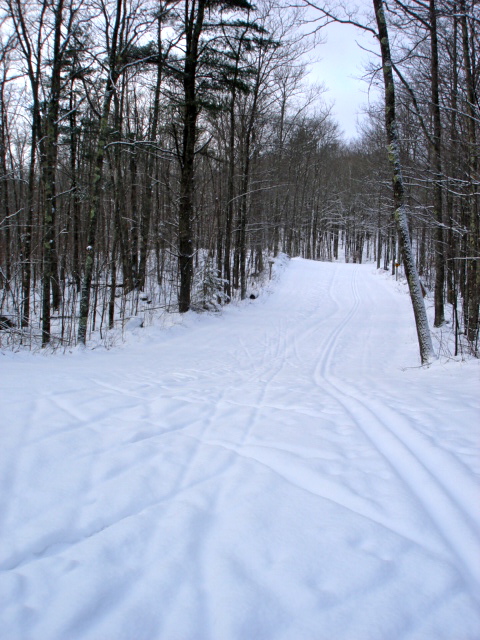