But the men’s team kicked off the World Cup Season with a bang this morning!

Seriously!  Lowell Bailey got right down to business and brought home a 9th place finish in the men’s 20km individual.  This ties his best ever career finish from Fort Kent last winter in the Mass Start.

Watching my team mates kick some serious tail makes me giddy.  Way to go Lowell, hows that for getting the season started off right?

1 in the top ten. 2 in the top 20 (Jay got right in there for an 18th place finish and collected valuable world cup points!)

Couldn’t be much more proud!  I’m beaming.  The ladies race tomorrow, you know this girl will be glued to my computer cheering like mad.

Nothing will kill a piece of your soul quite like roller skiing on November 29th in the pouring rain.

If you had told me in October that I would be doing running intervals in the pouring ran at the end of November… I would have laughed.

I would have gawked at you…

And I would have retorted with something to the effect of, “No way in Hell!!!”

….as if I have any control over the weather?

They came.  They raced.  They shot at stuff.

The opening races went off without a hitch this weekend in Sweden and this afternoon I heard word from my team mates across the ocean.  The World Cup and IBU Cup teams have been named!

For the US.  The four men starting in the opening World Cup this upcoming wednesday in Ostersund will be Tim Burke, Lowell Bailey, Leif Nordgren, and Jay Hakkinen.  The Women will be Sara Studebaker, Laura Spector, Susan Dunklee, and Lanny Barnes.  (this will be Susan’s first World Cup start!!!)

This also means that packing up the van and driving to central Europe for the IBU Cup will be Jeremy Teela, Bill Bowler, Tracey Barnes, and Annelies Cook.

Now to make things more complicated teams can (and often do) change.  So incase you’ve just started to follow biathlon because you know an athlete let me break it down for you.

As you noticed above we have two international race circuits…

You have the IBU Cup. This circuit is virtually the “Minor League” of biathlon.  Good for practice. Great for developing athletes.

Then you have the World Cup.  This is the real deal.  Best in the world. Legit competition containing a heck of a lot of mindblowing awesomeness.

(You must qualify for the World Cup by placing no more than 15% behind the top three finishers in an IBU Cup race, Open European Championships, World Championships, or the Olympic Games.  This keeps the level on the World Cup at or above a certain level and doesn’t allow countries that don’t really have developed teams to just send anyone up to race the big dogs. Slaughtering athletes is not a pretty thing.)

Now you can go back and fourth at the discretion of your National Team.  It definitely happens on the US team.   If you are doing well on the IBU Cup you can get bumped up to race at a World Cup and if things aren’t going too hot on the World Cup they can send you down for a race (ala back to the minors).

Ah ok. Blahblahblah.  Can’t you tell racing gets me all fired up?  And this is me racing vicariously…

Here’s the current count down.  Twoish more coachless workouts.  Twoish more weeks out east.  Getting fired up (if only to save me from my own disappointment with not being in europe)!

More than anything right now.  I would like to be in Europe.  Specifically, Ostersund.

The opening race of the international circuit kicked off in unseasonably warm Northern Sweden this morning. …and as excited as I am for my team mates to start racing (it is true, i really am their biggest fan) I can’t help but be a little disheartened that I am not there as well…

The girls have reassured me that I’m not missing out on much.  The conditions in Lake Placid are pretty much the same as Europe.  Springlike. At this point you can’t do much but roll with it.

Sure I want to be in Europe.  I want to be getting the first races under my belt.  I want rub shoulders and elbows.  I want to work out all the jitters and kinks.  I want to be on my skis (yes those skinny slippery things I haven’t been on for 8 months).  I want to wear my pink athlete bib and attend “official trainings”.  I want to get in the start gate and talk myself out of spazzing.

I realize things aren’t going “as planned”… but thats part of being an athlete.  Sometimes the plan changes and your ability to adapt is crucial.  A good friend recently told me that walls aren’t there to keep us out, but to keep everyone who doesn’t want it as badly out.  Simple right?  I’ve got my own path to Europe.  Might not be what I expected… but its mine.

Until then…  I’ll be climbing the ladder the only way I know how.  ….  whatever it takes to get to the top.  As Sara always reminds me, See you Soon!

First off Happy Thanksgiving…Turkey Day…Hunting Season…or for you Europeans, November 24th …Whatever you would like to call it  I hope where ever you are you are surrounded by family and friends.

Before our team scattered across the country we all got together for an early Thanksgiving dinner at the Cook’s house.  It was pretty spectacular!  The girls were all happy, apparently fish and potatoes in Sweden just wouldn’t cut it. And although I’m across the country from my family right now I am so lucky to be taken in by such a loving family who made me feel right at home today.  The Cook clan (or Team COOK) is really an unparalleled group of people.

I realize I should be thankful on a regular basis but as tradition stands I will use to today to restate just how grateful I am.

I am thankful for my family and friends.  Near and far. Your continual love and support (even when I’m being an unnecessary stinker) is unmeasurable. Your belief in me keeps me strong.

I’m thankful for this ridiculous opportunity to make the wacky unconventional sport I love a profession.  I rarely have to be reminded how wonderful my “job” is.

I am thankful for my team.  You guys are the older sisters I never had and always needed.  I’m so grateful to have such a kick ass group of ladies to keep me in line.  You guys inspire the hell out of me.

I’m thankful for the locals that have made Lake Placid feel like home.  You guys keep the OTC brain rot from consuming me.  Thats right you are responsible for my sanity, you may now pat yourself on the back.

I am thankful that I’m ok.  I really don’t have much to legitimately complain about.  Sure ok, I know I find all sorts of things to rant on… but I do know just how fortunate I am.  And I know I should embrace just how good I have it more fervently.

I’m one lucky son of a gun with so many people to thank.  Thank you.

…on a side note. I won a turkey this morning at a running race… Yeah I know, an entire frozen hunk of poultry.  Who is up for Thanksgiving round three?

You are probably already well aware of how clumsy I am… yes yes. that would be super clumsy. 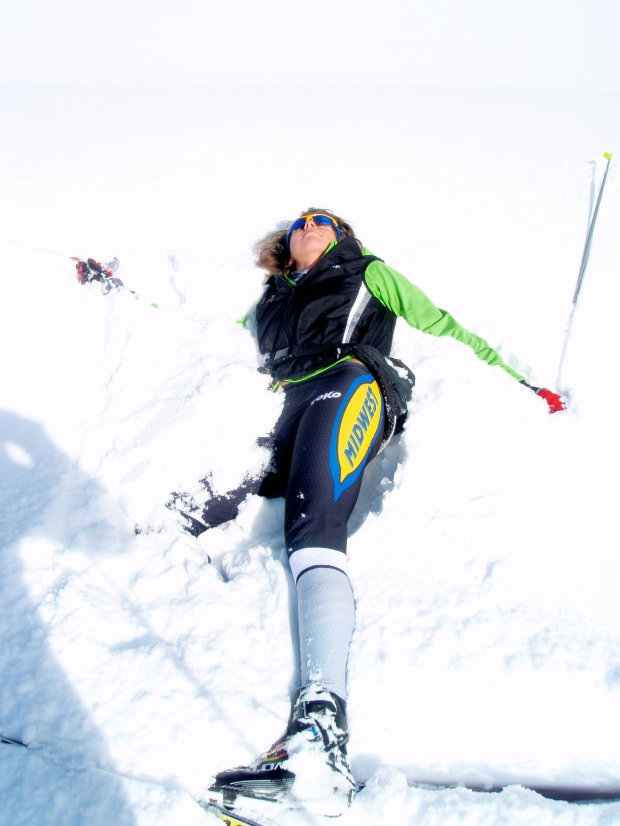 I fall down alot.  Potentially even more than the average person.  The good news?  I’ve gotten really good at it.  So when the ground is coming at me fast I can generally hit it and not cause too much bodily harm.  Today was no different.  In two hours I fell a grand total of not one, not two, but six times!  SIX!  Call me super klutz. 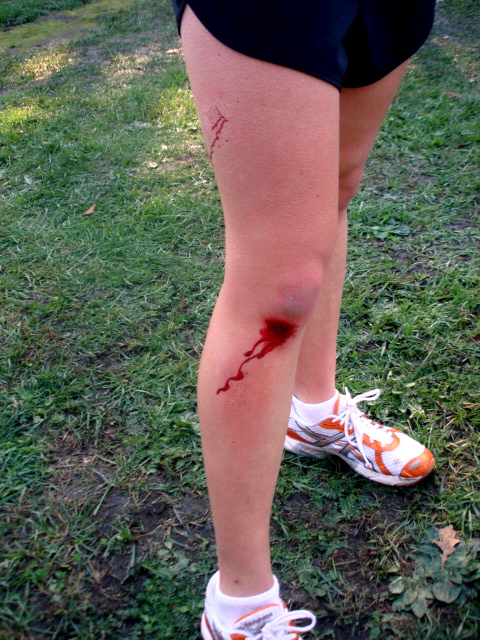 My poor running partner has no idea what he was getting himself into.  We’ve been at a few of the same running races throughout the summer and fall and finally decided who better to go on a jaunt with!  I slipped and slid a bit on the way out to avalanche lake.  Loosing my footing and using my butt as a way of getting down rocky surfaces. 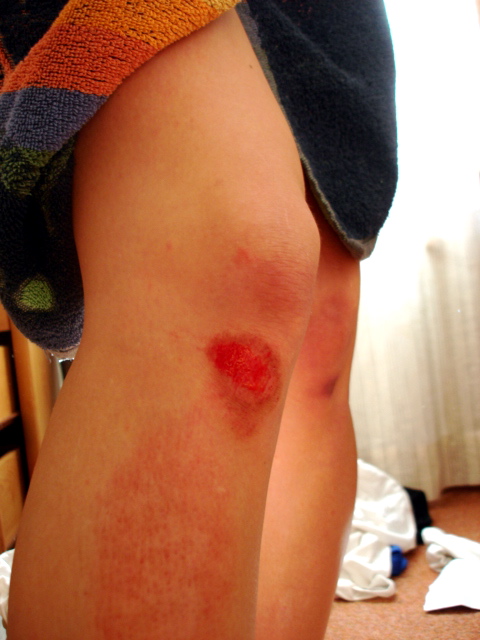 Losing chunks of my skin might just be a hobby.  On our way back towards the parking lot our path got slick, and I found myself progressively more and more on the ground.  I took four good diggers on the way back in. Four!  Harrison witnessed all of them.  At one point (after making sure I was ok) he had to sit down he was laughing so hard.  I just laid there on my back in the middle of the trail and collected my thoughts as I cursed the rock or root I had chosen to not avoid.

We made it back to the car relatively unharmed.  A little dirty.  A little scoffed up.  But intact and thrilled with our morning adventure.

One last photo for you guys…. This is me as a 15 year old.  Its right after a 5km road race in Cesis, Latvia.  I missed a curb and ate pavement (once again).  It was a little embarrassing to have to receive medical attention to pick all the dirt and rocks out of my legs after a road race. The picture cracks me up every time (such a goofy kid)! Enjoy!

Corrine Malcolm
Create a free website or blog at WordPress.com.